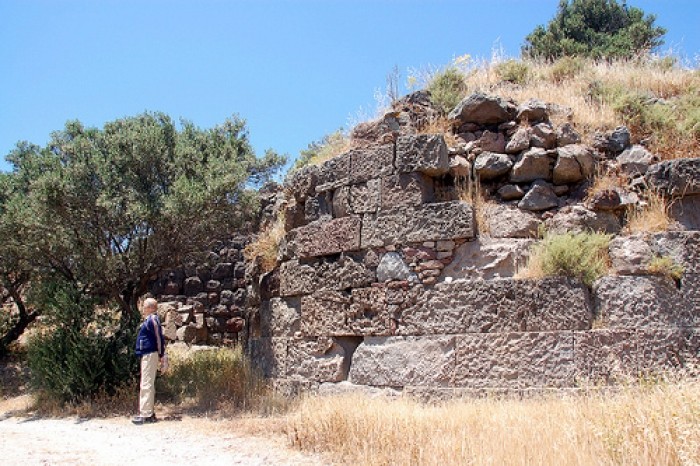 In the settlement of Klima you will find the ruins of the old city of Klima which used to be the island’s first port.

After the decline and the destruction of Fylakopi, the Dorians built the second biggest city in the island (1100BC-800BC) extending from the south part of Trypiti to the region of the present Klima town.

Today, you can visit the settlement’s two acropolis: the hill of Prophitis Ilias and Pyrgaki- you can see parts of  the market-place walls, parts of a temple dated from the Hellenistic and Roman period, parts of the ancient theatre, as well as the exact spot where the statue of Aphrodite of Milos was discovered. Descend till the end of Trypiti road towards  the Catacombs, park your car and walk on the path. Initially, you will see the ancient city walls and a bit further away in a area where the gymnasium was supposedly standing, you will find the spot where in 1820 a local farmer discovered the famous statue of the goddess Aphrodite (dated from 120BC). Keep walking on the earth-road and you will get to the ancient Roman theatre. 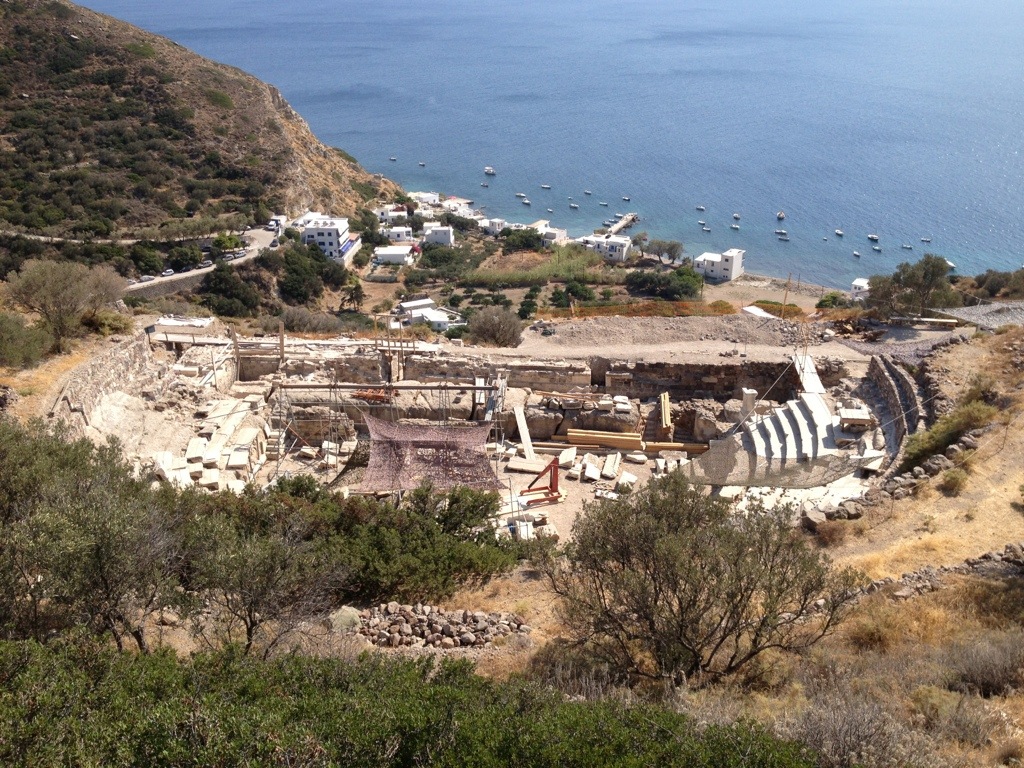 The ancient Roman Theatre was originally constructed by the inhabitants of the ancient city of Klima, possibly during the Hellenistic Age (3rd century BC).

However, after the destruction of the city by the Athenians in Roman times, above the preserved foundations of the classic theater, a bigger one was built made of snow-white Parian marble and remarkable bas-reliefs, which it is estimated that it had a seating capacity of 7000 spectators. This is also the shape of the theater you see nowadays.

From the theatre seven marble tiers, six rows of seats, the auditorium , the orchestra, the stage floor and a lot of architecturally elaborate parts are preserved. The excavations began in 1989, and the order for the theatre’s first cleaning was given by Ludwig II, Othon’s father, at L. Ross’s instigation, who along with Othon was the first one to visit the ancient theater in modern times.

Built on prominent spot, on the hillside, the theatre overlooks the port, the view from there is spectacular and its acoustics are very good. So, quite often theatrical performances and music happenings take place there, as in its present shape  the theater has a seating capacity of 700 spectators. 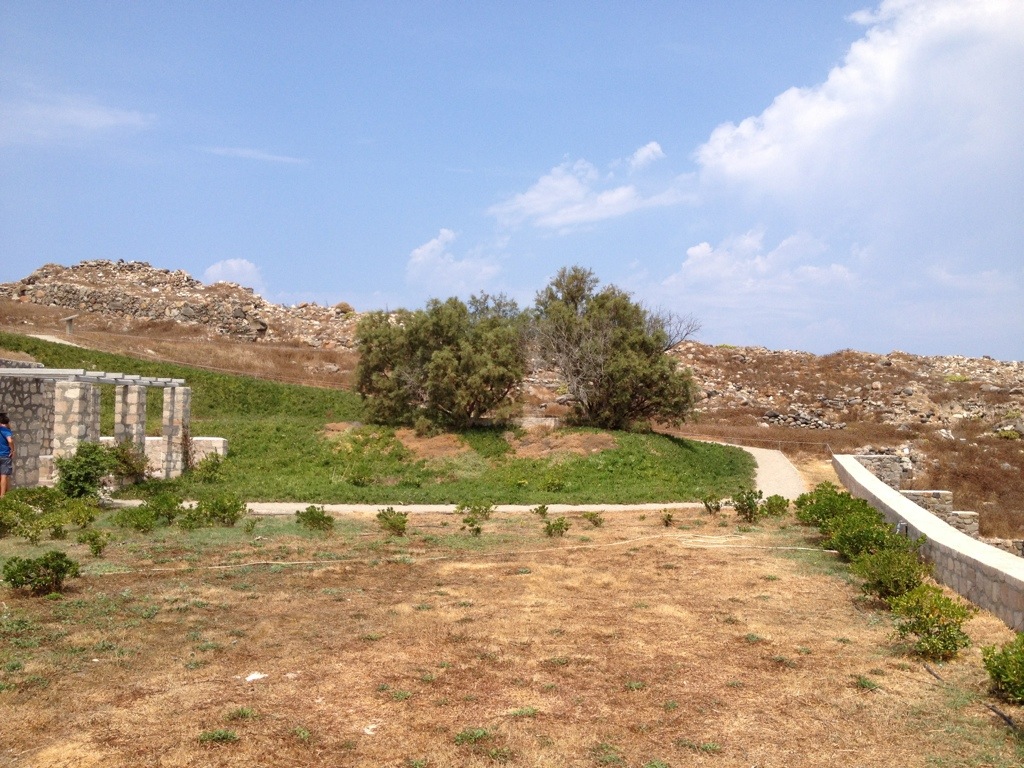 On the way to Pollonia, on your left, you will see findings from the ancient city of Fylakopi, which used to be one of the most important settlements of the Cycladic civilization and the most significant Aegean city in prehistoric times.

In Fylakopi you can see 2 millennium year old remnants. There are habitation traces from the beginning of the Early Bronze Age (around 3000BC) until the end of the Late age (1100BC). Built on the island’s north part, so as to provide the possibility for surveillance to a big part of the sea, Fylakopi developed into a significant commercial and cultural center. Because of the trading  of the obsidian precious stone, it developed rapidly, it became a strong city with Cyclopean walls against the invaders. It was destroyed and it was rebuilt three times.

The settlement’s habitation had begun already from 3000BC., and the city was abandoned in 1100BC, having lasted three historic periods. In pre-residential age (3200BC-2300BC), the construction of houses commenced. In the 1st historic age (2300-2000BC), the settlement was of around 200meters (considered large, based on the facts of those times in the Aegean area), there was no organized town planning disposition, but it had a relatively organized cemetery. Simultaneously, in that time period the stone usage was discovered and the obsidian exports increased significantly, hence, a total commercial flourishing took place  in Milos. In the 2nd period (2000BC-1600BC) walls were built for protection against possible invasions, the tombs were already located outside the city walls, whereas the houses were situated in a terraced disposition on the hill. In that period, the ceramic art was specially developed presenting clear Minoan influences and the commercial relations of the Melians were further developed in various areas in Greece and mainly in Crete. That period ended with the destruction of Fylakopi, possibly by fire set by invaders, and the city’s 3rdhistoric period (1600BC-1110BC) began with the building of the third settlement. In that last period Fylakopi had an organized, complex, town planning, a fortification with high Cyclopean walls of over 6metres in width and bigger houses, some of which were two-storeyed. At the beginning of this period, the Minoan civilization influence was intense (parts of a Minoan Linear A table were discovered), but gradually elements of the Mycenaean culture penetrated and in the end they prevailed. In around 1400 a palace according to the Mycenaean architecture was built with a lot of rooms and a two-room sanctuary. Moreover, greats works of sculpture and ceramic art were made, the most important of which was the statue of “Kyra of Fylakopi”. (It is in exhibition in the Archaeological Museum of Milos). Since 1200BC in the Aegean area, there had been reorganizations, well-known commercial routes were abandoned, whereas both the Minoan and the Mycenaean civilization were in decline. In that period, the city of Fylakopi stopped being a commercial center and began to decline, whereas the ancient city of Klima became the commercial center where all the island’s activities took place.

Today, the largest part of the city lies under the surface of the sea, but it is worth visiting it so as to admire the remnants of the imposing Cyclopean walls of the settlement (made of volcanic stones), the Sanctuary,  and the settlement’s Palace. Until the present day, numerous findings are preserved suggesting the activities of the settlement’s inhabitants and the frequent contact network, mostly with the rest of the Cycladic islands and Crete, whereas visiting the Archaeological Museum you can see remarkable items of ceramic art from the city of Fylakopi, such as earthen pots, stone, earthen and bronze statuettes, a Linear A table, diverse handy objects and the famous statue of “Kyra of Fylakopi”.