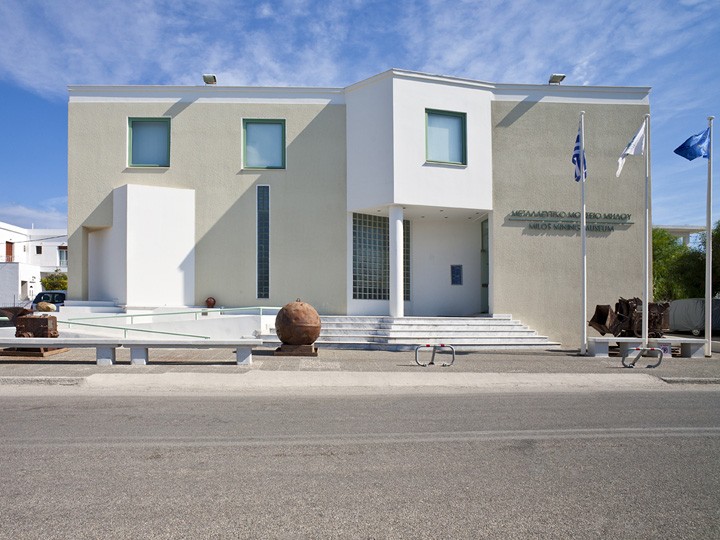 The Mineral Museum of Milos, an urban non-profitable company, was made by S&B Industrial Minerals S.A. in 1998 with the aim to honor and promote the mineral history as well as the geologic and natural heritage of Milos.

Contact tel.: 22870
At the ground-floor room the social, financial and technologic dimension of Milos’s mineral history and tradition is presented. The exhibition on the ground floor is dedicated to the island’s natural and geologic wealth, where the minerals that used to be mined on the island since the Neolithic age are presented all the way to the present day; special emphasis is given on their usage in our everyday life. Complementary, films are projected dealing with the mining and the procedure of the minerals’ production, whereas in the projection room visitors can “travel” back to older periods through the descriptions of the old miners.

The Museum realizes organized geologic walks, whereas in its premises educational programs take place and pedagogic and recreational activities are organized in cooperation with skilled educational carriers and museum-educators. In its 12 years of operation, the Museum has been visited by more than 135,000 people from Greece and abroad, whereas it has become a favorite destination of educational tourism. 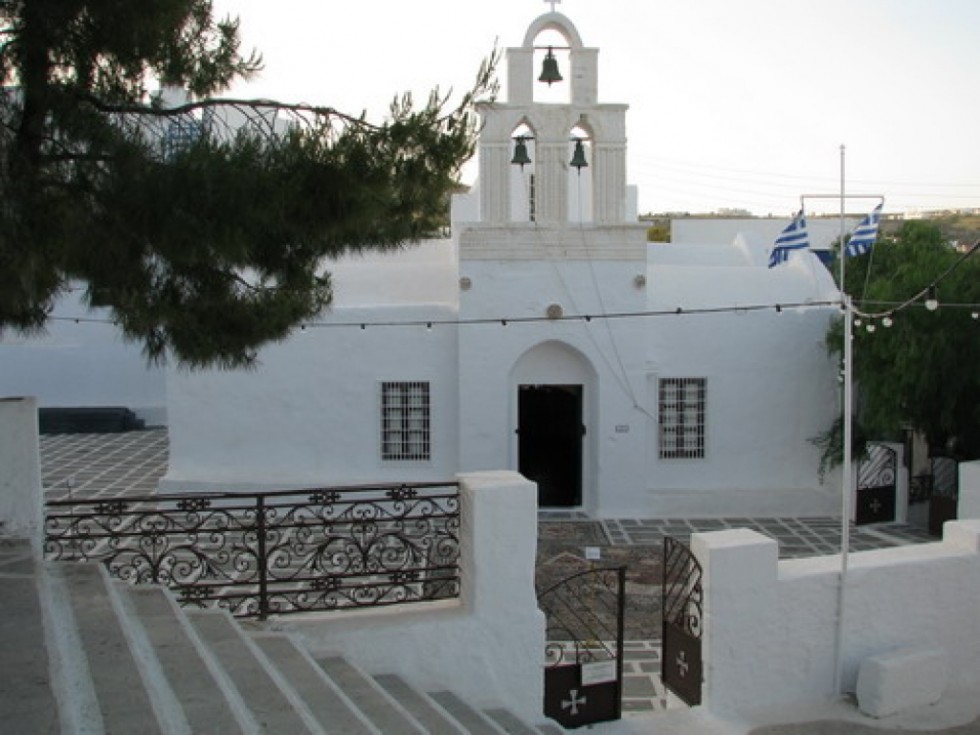 Very close to Adamantas port, the church of The Holy Trinity is located, where the Church Museum is housed.

This church, which is over a thousand years old, is characterized as “crossed-shaped three-aisled basilica with troulokamara (arched-dome)”, since it is made of three aisles on which the dome rises vertically having the shape as the temple. This type of church is very rare (there is only one more such church, in Peloponnesus, in Levidi, Arcadia) and it is an interested architectural monument.

Initially it was made so as to serve as a monastery dedicated to the Virgin Mary of Theofani, but in 1839 it was purchased by Cretan refugees and they turned it into their village’s church. The edges and the arches of its bell-tower are influenced by the gothic patterns, whereas the lintels and the pilasters are decorated with traditional sculptures and religious patterns. In the yard, at the church’s entrance, you will see two mosaics, creations of the local artist Giagos Kavroudakis. These two colorful mosaics are dated from 1937; one of them depicts a dragon in the shape of Milos, whereas the other depicts the battle of the good against the evil.

Ever since 2000 the Church Museum of Milos has been housed in the church of The Holy Trinity, a museum where you are given the chance to admire a great part of the Melian artistic tradition and heritage as well as of the Melian hagiographic tradition. More specifically, you can see icons dated from the 14th century (such as a rare deposition from the cross), works of the Cretan school, works by Emmanuel Skordilis and Antonios Skordilis and Cretan painters, epitaphs and woodcut lecterns, 17th century iconostases, the bishop’s throne, the icon screens, silver chalices, incensories, golden offerings, rings, necklaces, earrings and other exhibits of important artistic value. 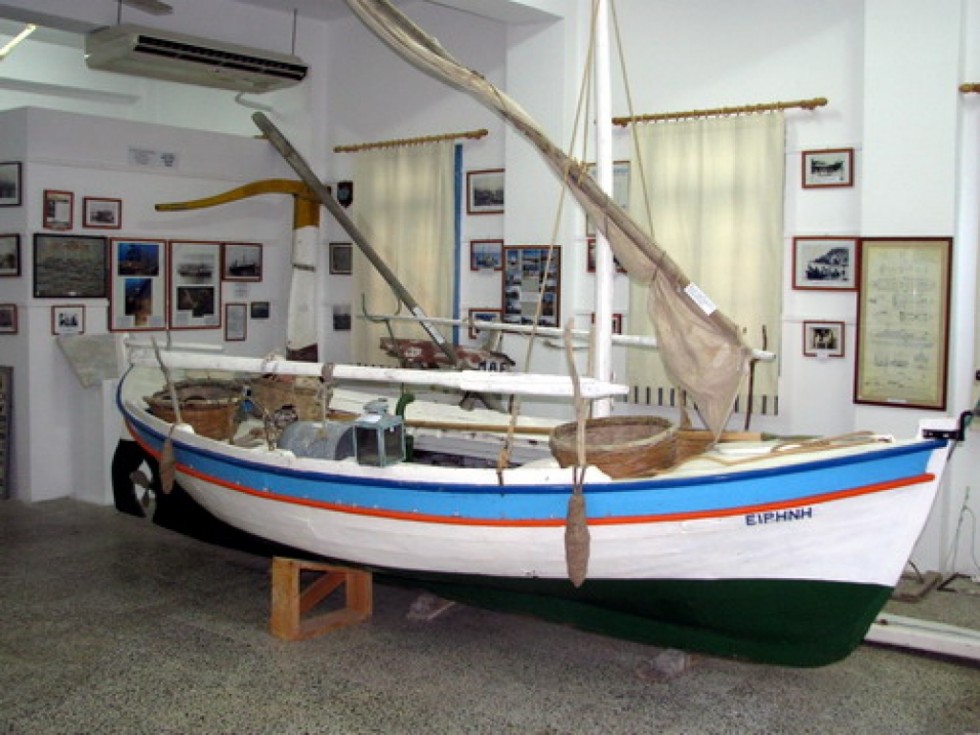 The Museum opened up in September 2008 and it is housed over Adamantas harbor, in the building of the island’s old Community.

It was realized by the efforts of the doctor Petros Armenis in order to gather plenty of exhibits relating to the naval activity in Milos. The exhibits go back to the prehistoric age, with tools made of obsidian, then we move historically to the battle of Salamis and finally we reach the modern times.

In the Naval Museum you are given the chance to admire also rare maps, made by special cartographers as well as the wooden boat “Irene”. 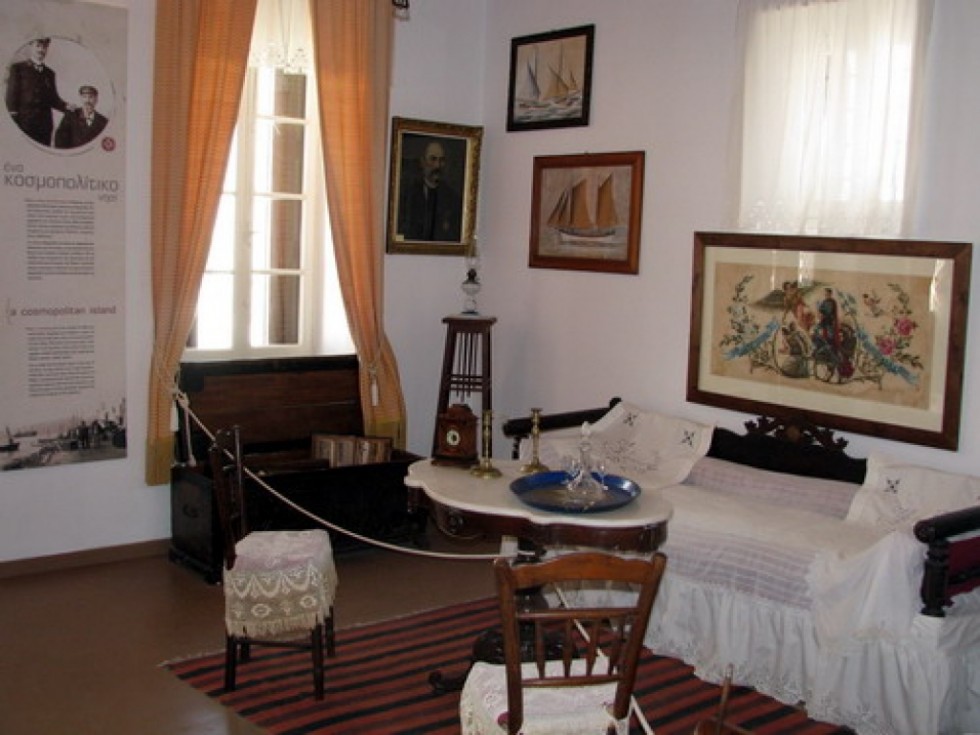 The Folklore & History Museum of Milos is located behind the church of Panaghia Korfiatissa in Plaka.
The museum was established in 1967 by the “Union of the Melians in Athens” and there you can learn a lot of things about the life of the Melians after the 17th century (mostly from 1850 up to 1930, which was a peak period for the Melian society).

A visiting to this museum takes back into another time period, as you will see how a city Melian household of the 19th century was like. The museum is not an exact representation of a certain type of a Melian household, but starting from the heterogeneous objects, the aspects of life of the inhabitants in that time period are presented: their dealings inside and outside the house, their influences from other regions, their nutritional and dress preferences, their ways of entertainment, the organizing of space and time and the exploitation of the local resources.

This two-storeyed museum is made of a living-room and the unique exhibits located in it, the work place where the loom is found, the house’s kitchen room, the bedroom, the cellar (used also for the storage of rural products), and the top-floor which constitutes a historic record. In all these rooms you can also admire furniture, textiles, needlework, clothing of that period, house ware, decorative objects, everyday objects and old photographs. 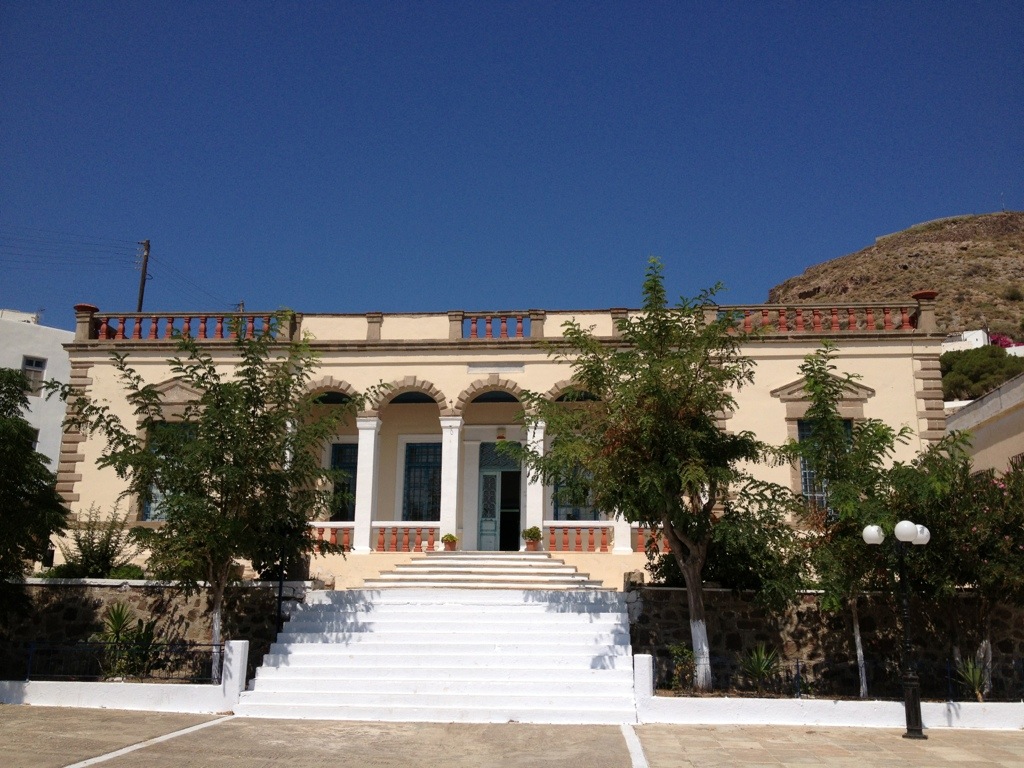 The Archaeological Museum of Milos is situated in Plaka and it is housed in a beautiful, neoclassic building by Ernst Ziller.

At the museum the following wonderful collections are exhibited:

A prehistoric collection from Fylakopi
A collection of sculptures and bas-reliefs
An obsidian collection
A collection of inscriptions
A true copy of Aphrodite de Milo rises in the Museum Entrance (Room A), which was made in the workshop of the Louvre Museum. In the left side of the room you can see glass-shown cases with blades, scales and obsidian exfoliates from Fylakopi, Nyhia and Demenegaki. Moreover, in the same room, you can see a large burial jar dated from the 6th century BC.

In the left room (Room B) you can see prehistoric objects dated from the 5th millennium till the end of the 2nd millennium BC. There, you can see glass-shown cases with archaeological findings from ancient Fylakopi, many pots with lilies painted on them , statuettes ,a tufa altar from Fylakopi’s sanctuary, a small collection of marble early Cycladic statuettes and the famous “Kyra of Fylakopi”.

In the small room behind the entrance (Room C) you can admire geometric, archaic, classic, Hellenistic and Roman works, plenty of coins, tools and handy objects.

Closing, reaching the room on the right of the entrance (Room D’), you will see findings from the ancient town of Klima, plenty of sculptures dated form the Hellenistic and Roman period (a Hermaic statue of Marius Trofimos, a tomb bas-relief of a young man with his servant etc.), marble donations and tables of the archaic Melian alphabet (Thanks to the peak the Melians had reached in the historic period, they had developed their own “Melian alphabet” composed of 21 letters).